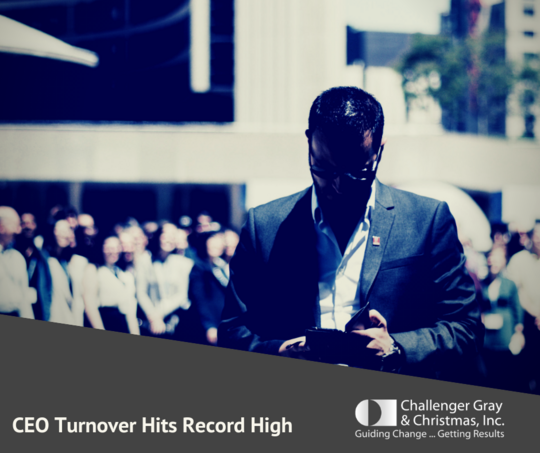 “The uncertainty surrounding newly announced tariffs and the dive in value of Chinese currency, how the market will react to the Fed’s decision to cut rates, the current softness in the manufacturing sector – all these issues are being felt at companies across the United States,” said Andrew Challenger, Vice President of Challenger, Gray & Christmas, Inc.

“Shifting consumer behavior and advancements in technology create the need for leaders with different skill sets. Boards are recognizing that they may need fresh blood to tackle these issues. At the same time, top leaders in the C-Suite are taking advantage of the tight labor market and recognizing that they could potentially find better opportunities elsewhere,” he added.

Companies in the Government/Non-Profit sector continue to lead all sectors in CEO exits with 26 in July. The year-to-date total for this sector is 188, 29.7% higher than the 145 changes announced through July last year.

The Technology sector announced the second-highest number of CEO changes in July with 24, totaling 107 in this industry for the year. That is 17.6% higher than the 91 announced through this point last year.

Hospitals announced 11 CEO exits in July, the highest number so far this year. Hospitals have announced 46 CEO exits in 2019 thus far, 19.3% lower than the 57 CEO changes at hospitals in the same period last year.

Companies in the Energy industry announced seven CEO exits last month for a total of 38 for the year, 192% higher than the 13 CEOs who left their posts through July 2018. The Financial industry also announced seven CEO changes in July for a total of 71, nearly the same number as the 70 Financial CEOs who left their posts in the first seven months of 2018.

Through July, 330 chief executives, or 39%, stepped down into other positions within their company, usually as a Chairperson or other member of the C-Suite. Another 232 have retired from the CEO role.

Five CEOs left their positions due to an acquisition or merger in July, bringing the year-to-date total to 15. That is compared to five CEOs who left for that reason through July 2018. Six CEOs left their posts amid scandal last month for a total of 16 so far this year.