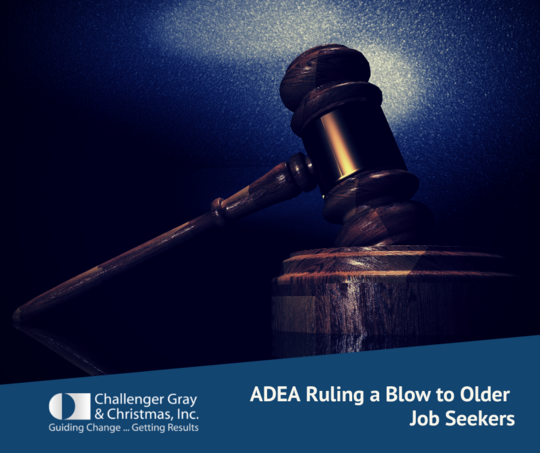 “Older workers already deal with multiple stigmas associated with their age – they demand too much money or they have difficulty learning new technology. These myths create another hurdle for older job seekers during an already stressful job search process,” said Challenger.

“Not only do they have to prove to hiring managers that they have the requisite skills and experience, but they also need to somehow demonstrate that they do not fit these stereotypes, all while making a strong first impression,” he added.

“Not only will this ruling potentially increase the discrimination older workers face, but it could leave companies open to brain drain, as the skills and accomplishments of older professionals contribute to growth and development. The channeling of older workers out of the labor market, especially skilled workers, damages the economic health of the country,” he added.

There are currently nearly 37 million workers aged 55 and older in the U.S. labor force, up from nearly 35 million at the start of 2017, according to monthly employment figures from the Bureau of Labor Statistics. This age group is currently experiencing a 3.2 percent unemployment rate, down from 4.0 percent in the U.S. overall.

“Dismissing older job candidates is a huge loss of experience and talent to an organization. To the hiring managers who see it as ‘taking a chance’ when hiring an older candidate, that is simply not the case,” said Challenger.

In addition to the sheer breadth of experience older professionals bring to a role, the soft skills that many companies seek in their workers and leaders, that younger counterparts potentially lack, have been cultivated over an entire career with an older candidate.

“Meanwhile, older workers have contended with the implementation of new technology for decades, especially those who are in the labor force now,” Challenger added.