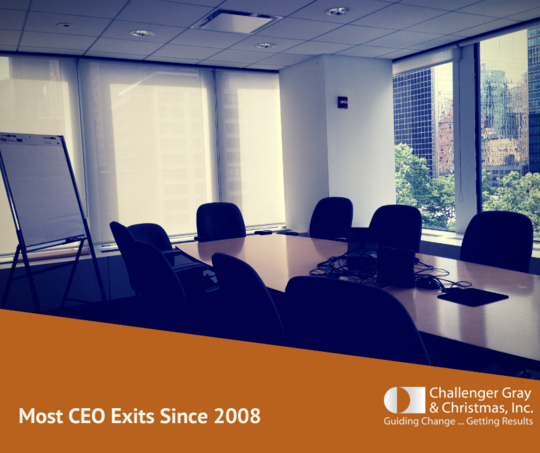 “We haven’t seen these numbers since the height of the recession, but the circumstances couldn’t be more different,” said Andrew Challenger, Vice President of Challenger, Gray & Christmas, Inc.

“The tight labor market and skills shortages in several industries mean many CEOs will be in high demand. Meanwhile, we have seen more leaders stay at their current companies than in 2008, either by stepping down into another C-Level role or as a Board Member, or taking another leadership position at a subsidiary or different operating unit, suggesting the company wants to retain the institutional knowledge and vision of the previous leader,” he added.

So far this year, 313 CEOs have stepped down from their roles, but remained with the company in some advisory, C-Level, or Board role, 26.6 percent of all CEOs who left their posts this year. That’s compared to 216 CEOs who stepped down in 2008, or 17.2 percent.

“There are a couple of explanations for the increased CEO changes that may not be directly related to a healthy economy facilitating movement among the C-Suite. It could also be due to economic uncertainty, as happened in 2008, and Boards wanting to get someone in place who is capable of leading through a downturn. The other possibility for the increase is that companies want to be more transparent in light of movements such as #MeToo, and are willing to let go of leaders that do not fit their culture or otherwise act unethically,” said Challenger.

The majority of CEOs (317) have retired this year, while another 215 resigned. Another 114 found new positions in other companies. However, 16 CEOs left amid scandal, six of whom were accused of sexual impropriety, 19 CEOs were terminated by the Board, and seven left amid legal trouble.

The Government/Non-Profit sector leads all industries in CEO turnover this year with 225 departures, 21 of which occurred in October. The Computer sector follows with 124. Companies in this sector include software and web developers as well as companies that make hardware for personal computers.

Financial firms have had the third highest number of CEO changes with 118 through October, 34 percent more than the 88 announced in this sector during the same period last year.

“The Financial industry is undergoing significant changes in how consumers want to bank, leading to the necessity for new ideas for these companies that include online options,” said Challenger.

Hospitals have seen 115 CEO changes, while other companies in the Health Care/Products space have announced 109 through October. 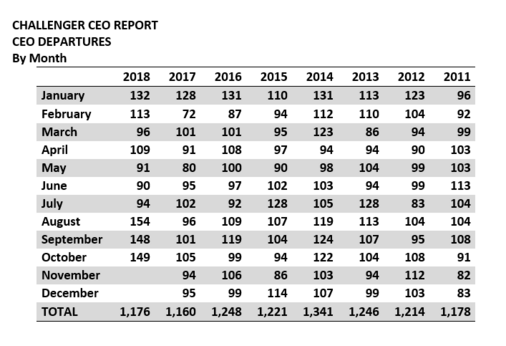 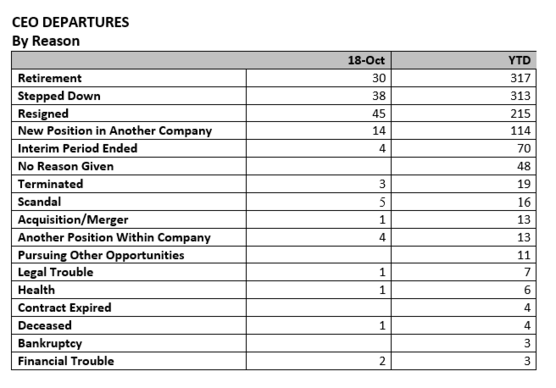 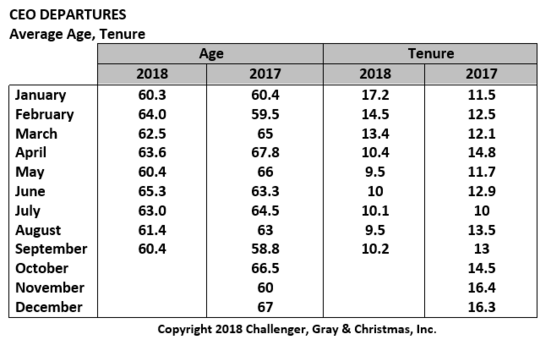