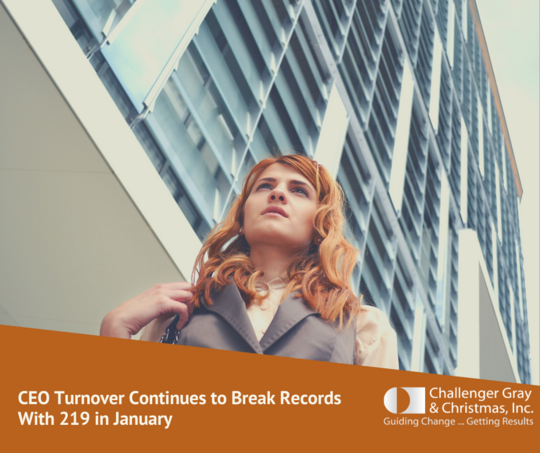 January’s record total was led by the Government/Non-Profit sector, which saw 41 chief executive exits, 41% higher than the 29 CEOs who left in this industry in December. Companies in this sector led all sectors in 2019, with 339 total exits.

“With the upcoming elections on both the national and local levels, many Government agencies and Non-Profits are gearing up for shifts in funding. For companies that work in Government, this could mean shifts in priorities for incoming administrations and for charities and foundations as well as shifts in effective fundraising,” said Challenger.

The Technology sector, which over the last decade of expansion has seen scores of new start-ups, saw 35 chief executive exits.

“Tech companies that survived the recession or began during the recovery are finding themselves in a new phase of growth and in need of new leadership. Meanwhile, large, longstanding tech firms are pivoting in new directions and trying to remain competitive with smaller start-ups,” said Challenger.

The majority of CEOs stepped down from their posts into other areas of the company, usually as a Board Chair or Member or into another role in the C-Suite. Another 49 CEOs retired from their positions. Twenty CEOs saw their interim periods end, while 16 left to pursue new opportunities.

“Most companies are holding on to their CEOs in some capacity, whether they transition to the Board, remain in a consulting role, or lead a different area of the business. This suggests that while a record number of CEOs are leaving that post, the vast majority of companies are generally happy with their performance,” said Challenger.

Of the 198 replacements Challenger tracked in January, 107 of them came from outside the company, while 91 were internal candidates.

“This continues the trend from last year which saw companies hiring external candidates versus grooming someone from within,” said Challenger.

NEW: Challenger will now report on replacement data each month. Please see tables on the last page of the report.

CEO turnover skyrocketing to start 2020, and more companies are choosing external candidates instead of looking at their own ranks, according to a new #ChallengerReport via @CNBC @mkmfitzgerald https://t.co/tKvfn6HRsR