2020 June CEO Report: Turnover Ticks Up: In Wake of George Floyd's Death, Three CEOs Out Due to Racism 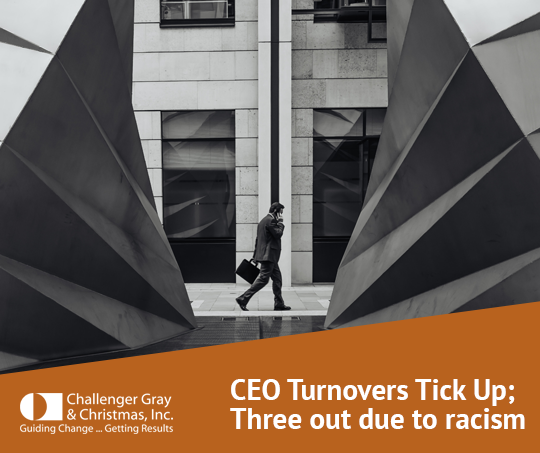 Three top executives left due to racism – one left vowing a person of color would replace him to create a more inclusive culture, one left after making racist comments, and one left because of allegations of racism. Many executives issued public statements of outrage over the death of George Floyd in Minneapolis, Minnesota, during his arrest in late May.

“The Black Lives Matter movement has led to demands for racial equality and accountability in companies’ highest offices. This may lead to a #MeToo-like reckoning for not only chief executives, but executive teams overall, as workers begin to demand equity in hiring practices,” said Andrew Challenger, Senior Vice President of Challenger, Gray & Christmas, Inc.

June’s total was led by the Government/Non-Profit sector, which saw 22 chief executive replacements, for a total of 120 for the year, leading all sectors in CEO turnover. This group includes charities, foundations, and government-run entities, such as transportation authorities or public education. That is 25.9% lower than the 162 CEO changes tracked through the same period in 2019, when it also led all other sectors.

The Health Care/Products sector reported the second-highest number of CEO replacements at 11 in June, for a year-to-date total of 60, followed by Services at nine in June and 52 so far this year.

Through June, 1,585,047 job cuts have been announced by U.S.-based employers, according to Challenger’s monthly Job Cuts Report. Of those, 671,840 have come from companies in the Entertainment/Leisure sector, which includes bars, restaurants, hotels, and amusement parks, hit hardest by the COVID-19 pandemic. These businesses reported five CEO changes in June, the same as in May, and 42 so far this year, up 82.6% from 23 at this time in 2019.

“These companies continue to struggle to recover, and the pressure on leadership regarding how to do business during our new ‘normal’ is enormous,” said Challenger.

“The uncertainty surrounding COVID-19 and the current recession makes predicting a trend in the numbers difficult. Past recessions have caused an uptick in CEO departures, but if there is a vaccine or improved treatments by the end of this year, the economy could rebound quickly.”
“In the meantime, with numbers of infections surging in many areas, economic uncertainty remains strong,” he continued.