With Billions in Lost Productivity, Is It Time for an Election Day Holiday? 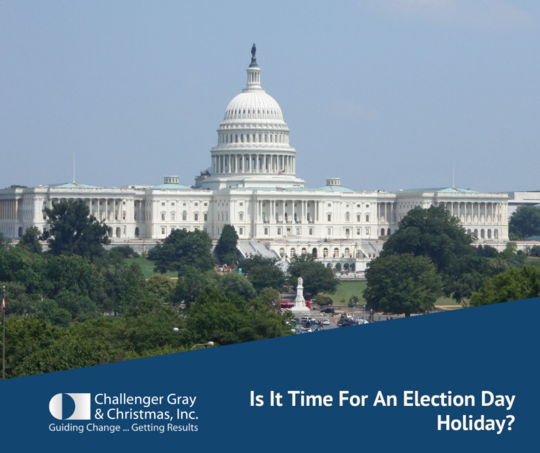 This year’s midterm elections are anticipated to bring out record numbers of voters. Both North Carolina and Texas report that the number of early voting ballots has surpassed 2014 totals. American workers will no doubt be tuned in to Election Day coverage from the moment the polls open until results are reported. In fact, a new survey released Tuesday from global outplacement and executive coaching firm Challenger, Gray & Christmas, Inc. found 29 percent of employers are seeing their employees request time off on November 6 specifically to vote or follow election coverage.

“While most companies are not experiencing any unusual increase in time-off requests, many workers will be laser-focused on election coverage that day, likely while they are at work. While official counts will not be reported until after the polls close, early voting tallies and exit polling news will keep workers glued to their computers, political podcasts, radios, and televisions,” said Andrew Challenger, Vice President of Challenger, Gray & Christmas, Inc.

“This year, especially with the polarizing nature of the elections and the number of important issues at stake for Americans, workers will likely be immensely distracted by coverage and could cost employers billions in lost productivity,” said Challenger.

Indeed, as of September, there were 156,191,000 employed persons over the age of 16 in America, according to non-seasonally adjusted data from the Bureau of Labor Statistics (BLS), with an average hourly wage of $27.24. According to the American Time Use Survey in November 2017, 82 percent of workers worked on an average weekday.

According to the U.S. Census Bureau, 61.4 percent of eligible voters turned out in the 2016 election. If that voter turnout rate is applied to employed Americans, workers who take one hour to vote could cost employers $2.14 billion.

That figure only takes into account potential voters who work an average weekday, spending one hour voting or watching election coverage. For the 128,076,620 total workers who are likely working on Tuesday and interested in the election, the cost could reach $3.5 billion per hour.

“There’s no doubt any Election Day is important to Americans. This Election Day, however, will be closely watched. Considering the cost to employers and the increase in workers requesting time off to vote or watch election coverage, it might be time for a National Holiday,” said Challenger. 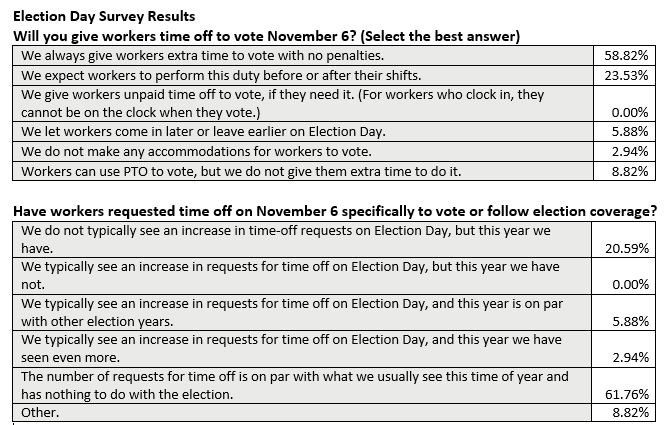