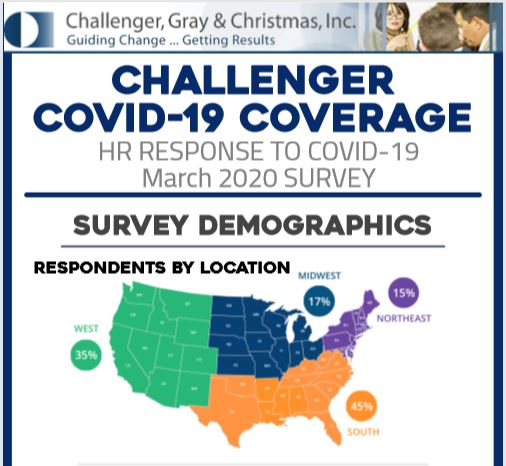 As states and localities take action to promote social distancing and slow the outbreak, companies and Human Resources teams have responded in kind, according to a new survey from global outplacement and executive coaching firm Challenger, Gray & Christmas, Inc.

“From creating, enforcing and implementing policy to complying with state, local, and federal recommendations and directives, HR departments nationwide are emerging as the first line of communication on the impact of COVID-19 to their workers,” said Andrew Challenger, Senior VP at Challenger, Gray & Christmas, Inc.

The survey was conducted online among 254 US companies of varying industries and sizes, nationwide, between March 20 and March 26, 2020.

“In order to alleviate the pressure on their workers, companies are offering paid leave options and flexibility for working parents who now find themselves homeschooling in addition to working. It’s clear that the way companies treat their workers right now will have a long and serious impact on company reputation in the future,” said Challenger.

33% of companies are now offering additional leave options, while 11% are offering paid sick leave. Seventy percent of companies reported they are specifically addressing child care, with 67% of those saying they are being more flexible in order for employees to balance home and work life.

Not all companies are reporting significant changes due to COVID-19 outside of work-from-home mandates. Nearly 9% said they will wait and see before taking action, while over 6% said they would only institute changes if a presumed positive case occurs to one of their team members or a close contact of a team member. Another 2% reported they have not instituted any changes.

Of the 94% of companies that have operations in multiple regions, 37% are implementing company-wide policies across the country, while over 50% report complying with individual state and metro policy.

“Standardizing the company’s approach to a situation like this in all locations is a fairly common compliance technique to ensure company standards are being met across operations,” said Challenger.

“More states and regions are implementing stay-at-home orders, which may standardize how companies react to the outbreak in the coming weeks,” he added.

Employers are also preparing for the possibility of cutting operations and staff. In fact, 49% of companies report they are very or somewhat likely to conduct layoffs in the next three months, while 11% reported they have conducted permanent layoffs. Another 7% have conducted temporary layoffs.

“Millions of Americans filed for unemployment last week, so it is clear companies across the country are instituting very real and difficult cuts. Employers are wary of letting their workers go right now after fighting so hard to find and retain them during one of the tightest labor markets in recent history,” said Challenger.

15% of companies stated they have furloughed employees, while 37% reported they are very likely to somewhat likely to do so in the next three months. 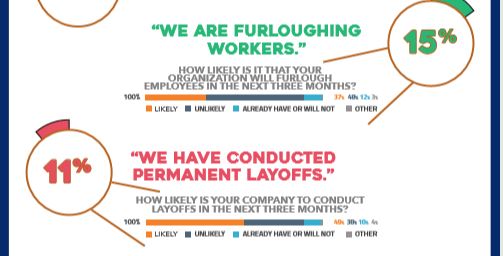 While cuts may be coming to many companies, 47% reported they are interviewing for open positions right now, and another 10% reported that while hiring is limited, they are hiring for critical positions.

For the 56% of companies that are onboarding right now, nearly 10% are postponing or revoking offers until the crisis passes. Of those, over half of companies are simply hoping the candidate stays around to accept the offer.

“The uncertainty is making planning very difficult for companies across the country,” he added.

Companies reported that the majority of the new policies have been communicated virtually. While 31% of companies communicated policies during in-person meetings, 61% did so through video conferencing apps. 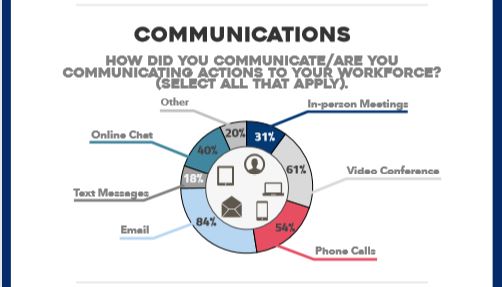