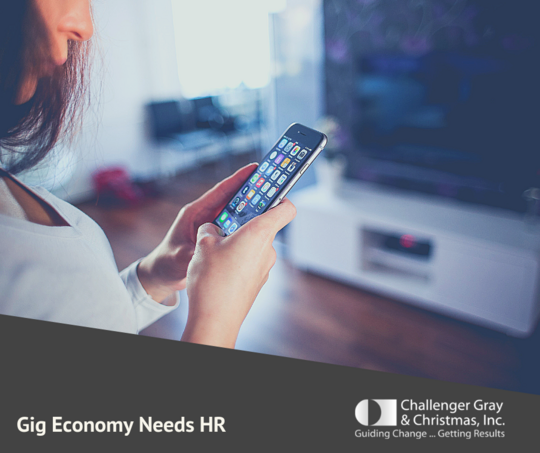 This is in stark contrast to rulings in the UK. In the case of Aslam and others v. Uber BV and others (October 2016), the Employment Tribunal in London ruled workers for Uber were in fact employees, entitled to minimum wage and holiday pay. Meanwhile, states like California and New York are working on or passing legislation more favorable to rideshare workers.

In fact, after California voters decided to legalize marijuana in that state in 2016, delivery drivers for the cannabis industry must be considered and treated as employees rather than independent contractors by law. That law went into effect in January of last year.

“Apps like Uber, Lyft, Postmates, or TaskRabbit connect jobs directly to consumers, a plus for both workers and users. However, numerous complaints from both users of and workers for these apps give evidence that whether these workers are employees or not, an HR representative would go a long way to aid in resolving these matters,” said Challenger.

HR could help specifically in matters of compensation. Recently, the food delivery app DoorDash was under fire for allegedly pocketing drivers’ tips. Similar services Instacart and Amazon Flex were also accused of using tip money to subsidize base pay. Only Instacart made changes to its compensation policy.

Another way in which HR could benefit both companies and workers is through creating and implementing policies to handle inappropriate interactions with the apps’ users.

“In the age of #MeToo, creating an environment where both workers and users feel safe is just good business. Especially for workers who have strangers in their cars or perform tasks in strangers’ homes, having dedicated HR representatives who can document issues could help create a course to correct inappropriate or predatory behavior towards the apps’ workers,” said Challenger.

In a recent interview with NPR and in her book, Hustle and Gig: Struggling and Surviving in the Sharing Economy, Alexandrea Ravenelle uncovers examples of gig workers being sexually propositioned by clients. These are workers who enter clients’ homes to cook a meal or build a cabinet, for example. Seemingly, the only recourse for these workers is to try to defuse the situation and leave gracefully.

“A skilled HR leader could help remedy the issues facing the worker side of these applications. While users can contact Customer Service or an app’s Help Line, workers are left with no one to call,” said Challenger.

Side hustles come in many forms. From the more lucrative real estate side hustle to the low-volume sales from a shop on Etsy, Americans are being creative with ways to earn extra money. According to a Credit Loan survey, the main reason people have a side hustle is to gain extra spending money, and other common reasons are to pay off debt and to increase savings.

According to a Bankrate survey, side hustlers make $686 per month on average. However, 49 percent only make up to $200 per month. Regardless, extra money can add up quickly, making a side hustle a great way to make use of any free time you might have beyond your 9-5.

“Clearly the sharing economy and the apps that created it offer great opportunities for both users and workers. These workforce issues – setting fair compensation practices and creating a safe work environment – go beyond public relations efforts, however. The implementation of HR will foster a healthy corporate culture, not only helping keep workers safe, but also building the credibility of the companies’ brands. This will ultimately attract both users and workers,” said Challenger.