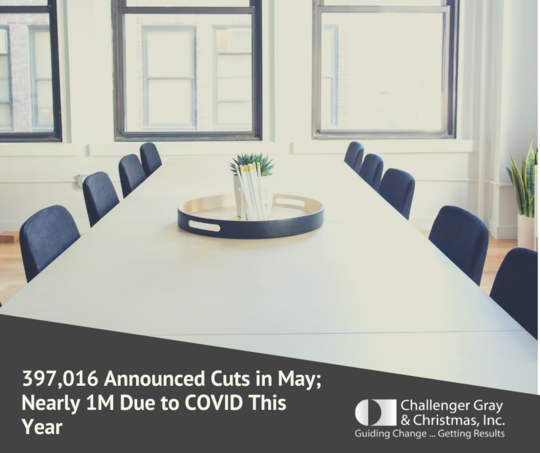 “Although we saw a significant drop in May over April, we are still in record territory and the cumulative number of cuts since the pandemic began is staggering,” said Andrew Challenger, Senior Vice President of Challenger, Gray & Christmas, Inc.

“As states and cities re-open, we can expect to see these numbers decrease as more people return to work. But many lost jobs will not return soon, if ever,” he added.

By far, the majority of cuts came from Entertainment/Leisure companies, including bars, restaurants, hotels, and amusement parks, which announced 163,680 cuts in May, a 15,900% increase over the 1,023 Entertainment/Leisure cuts tracked in the same month last year. So far this year, these companies have announced 578,886 cuts, a 7,063.5% increase over the 8,081 cuts announced in the sector through May 2019.

Retailers have announced the second-highest number of job cuts this year with 151,416, 201.4% higher than the 50,243 cuts announced through the same period last year.

The Services sector, which includes companies that provide catering, linen, marketing, and administrative services, announced 107,366 cuts so far in 2020, 846% higher than the 11,348 cuts announced through the same period in 2019.

The Media have been hard hit this year after two years of increased job cut announcements. In May, Challenger tracked 8,091 cuts in this sector, the highest monthly total for the sector on record. The year-to-date total of 16,750 has already surpassed last year’s annual total of 10,201 and 2018’s total of 15,474, which was the highest annual total since Challenger tracked 22,346 in 2009. Last month’s total is 39.8% higher than the previous monthly record of 5,787 tracked in March 2009. 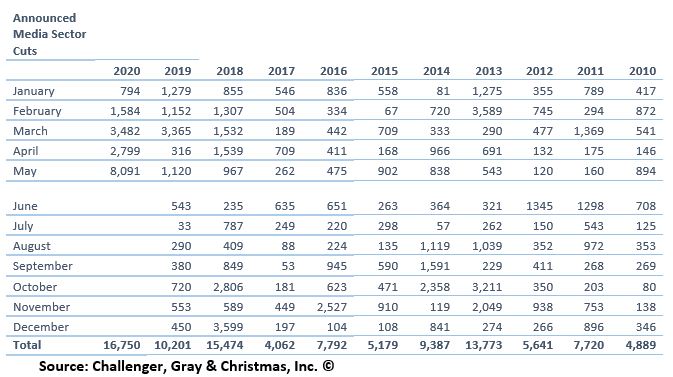 “Some of the jobs that were lost share skillsets with these new Retail, Delivery, and E-commerce positions. However, the new grocery store clerk or delivery driver now faces risks that were not part of those jobs’ descriptions prior to the pandemic,” said Challenger.