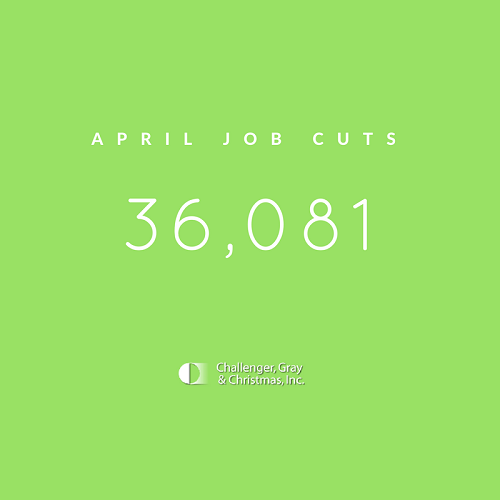 Job cuts announced by U.S.-based employers fell 40.2 percent in April to 36,081, the second lowest monthly total for the year, according to a report released Thursday by global outplacement and executive coaching firm Challenger, Gray & Christmas, Inc.

April’s total belies a trend for increased cuts after announcements in March hit a 23-month high of 60,357. March’s total was the highest since April 2016, when 64,141 job cuts were announced.

“Most of the cuts in March came from a single announcement, but an increase in large-scale job cut announcements could be on the horizon,” said John Challenger, Chief Executive Officer of Challenger, Gray & Christmas, Inc.

“With rising wages, near full employment, and solid job creation, we may be in for a market correction over the upcoming months,” added Challenger.

According to the Bureau of Labor Statistics, compensation costs rose 2.7 percent over the last year. Employers added 326,000 jobs in February and 103,000 in March.

Job cut announcements in April were down 1.4 percent from the 36,602 announced job cuts during the same month last year. So far this year, employers have announced 176,460 job cuts, 8.38 percent more than the 162,803 announced through the first four months of 2017.

Health Care/Products companies announced the second highest number of job cuts in April, with 4,949 for a total of 17,450 this year. Companies in the Services sector announced 14,665 cuts, with 4,101 in April.

Electronics companies announced 2,793 cuts in April for a four-month total of 4,070. That is 170 percent more than the 1,504 cuts that were announced in that sector through the same period last year.

“The tech industry has seen a number of new disruptive trends over the last year, including blockchain, more advanced artificial intelligence, and virtual reality. Companies in this industry are investing in these new technologies and that means creating more jobs,” said Challenger.