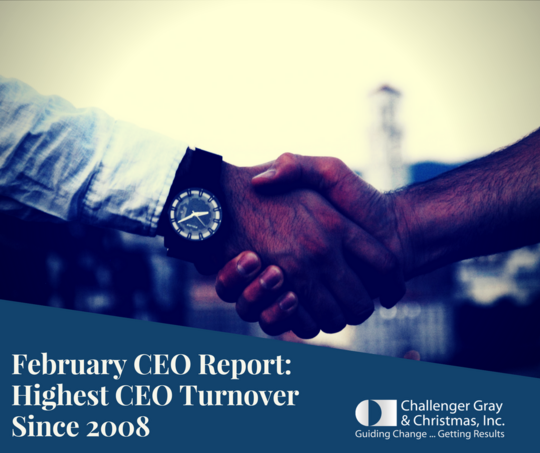 February’s total was down 14 percent from 132 CEO exits in January.

Despite the drop, 245 CEOs have left their posts so far this year, the highest January-February total since 2008, when 248 CEOs left in the first two months of the year. The year-to-date total is 22.5 percent higher than last year, when 200 CEOs left their posts through February.

“This year could end up being a big year for CEO changes, as companies attempt to comply with existing legislation and proposed legislation and deal with a tight labor market,” said Andrew Challenger, Vice President of Challenger, Gray & Christmas, Inc.

“2008 was a record year for CEO changes, mostly due to the challenges of the recession. We’re currently seeing a strong economy, with over 300,000 jobs added in February and low unemployment. The question is, will this last, and are boards preparing for a change by changing leadership?” added Challenger.

The Government/Non-Profit sector leads all industries in departures with 45, 25 of which occurred in February. Financial companies announced 31 exits so far this year, with 15 last month. Computer firms have announced 29 CEO exits in 2018, including ten in February. Health Care/Products companies reported 15, which is on trend with the changing health care landscape.

Most (35) CEOs retired from their posts in February, while another 28 stepped down into other roles in the company, usually as a board member or other C-Suite-level executive.

As the #MeToo movement continues to call out sexual misconduct in the workplace, two exits were due to a scandal involving some form of sexual harassment.

California companies saw the highest number of CEO changes this year with 26, six of which occurred in February. Companies in Texas saw 11 departures last month, while New York reported eight.