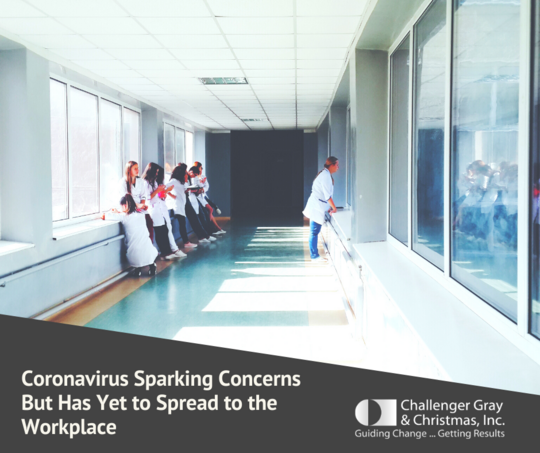 The most recent data from the Centers for Disease Control and Prevention (CDC) predicts 22 million people of all ages nationwide have tested positive for one of the known types of influenza viruses in the 2019-2020 season. High instances of influenza-like illnesses (ILI) occurred in 45 states and Puerto Rico. While it is difficult for the CDC to predict flu severity, Challenger estimates absences due to illness could cost employers over $13 billion in lost productivity this season.

“The Coronavirus has not had widespread infection rates in the US. However, it is impacting business in other ways. Trade and overseas demand, particularly with China, has slowed as the country is dealing with a nationwide epidemic and a global outbreak,” said Andrew Challenger, Vice President of global outplacement and business and executive coaching firm Challenger, Gray & Christmas, Inc.

Shipping is taking a hard hit as China battles the virus, as cargo-carrying vessels bringing supplies to China are now earning 93% below what they made during its peak in 2019, and 95% below peak for crude-carrying vessels, according to a report from Bloomberg.

Meanwhile, The Chairman of the Federal Reserve Jerome Powell will be talking to Congress this week, which will likely include discussions of how the Coronavirus will impact not only China’s economy but also the US economy.

“While the Coronavirus has yet to sicken many Americans, and hopefully, spread of that disease remains contained, the flu season in the US has begun. After the severe flu season in 2017-2018 affected people across the country, the nation’s employers would be wise to start discussing prevention measures with their workforces if they haven’t already. Encourage workers to wash their hands often and stock soap at all shared sinks, and hand sanitizer in other shared spaces. Remind workers to get vaccinated for the circulating flu types, and tell sick workers to stay home,” said Challenger.

Last year’s flu season sickened over 35.5 million people, down significantly from the 45 million people sickened in 2017-2018 season. Roughly 22 million of last season’s flu patients were working age, between the ages of 18 and 75, according to data from the CDC.

This year’s flu season is similar to the 2012-2013 season, according to the CDC, which saw 33.7 million people sickened. 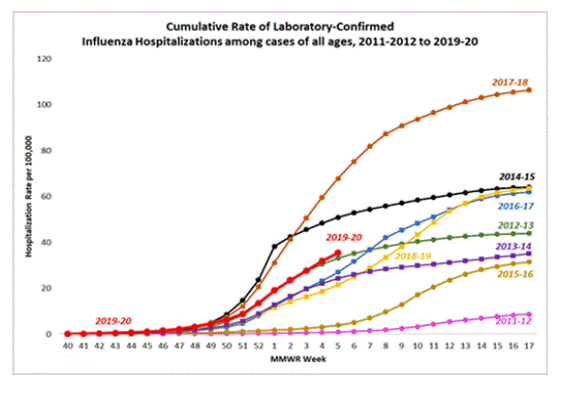 Challenger predicts 23.4 million people between 18 and 75 could become ill with the flu this season, using age data from the 2012-2013 flu season. With the current employment-to-population ratio of 61.2% and average hourly wage of $28.44, according to the Bureau of Labor Statistics, employees taking four eight-hour days away from work due to the flu could cost employers $13,056,764,338.

“To limit this cost, workplaces nationwide must start preparing for the possibility of flu-related absences and take precautions to stymie infections,” said Challenger.

“Even if this season is more severe or if the Coronavirus does begin to factor into American workplaces, the impact of losing any workers during the flu season is considerable, especially to small and mid-size firms that may not have the people to cover absences without disrupting day-to-day business,” added Challenger.

The CDC recently implemented surveillance programs to monitor cases of flu due to the severity of the 2017-18 season. Due to the high number of flu cases and deaths during the flu season, it is important to protect yourself by getting the flu shot.

“In the current tight labor market, many employers have already expanded work-from-home opportunities to attract and retain talent. Flu season is a good time to promote the use of those options, as it will help keep any infection from spreading,” said Challenger.

The CDC recommends staying home from work four to five days after the onset of symptoms. People are most contagious the three days after symptoms begin.

While the Coronavirus sparks fears, workplaces need to be on the lookout for the flu this season. #humanresources #flu #coronavirus https://t.co/avsjN9mM84