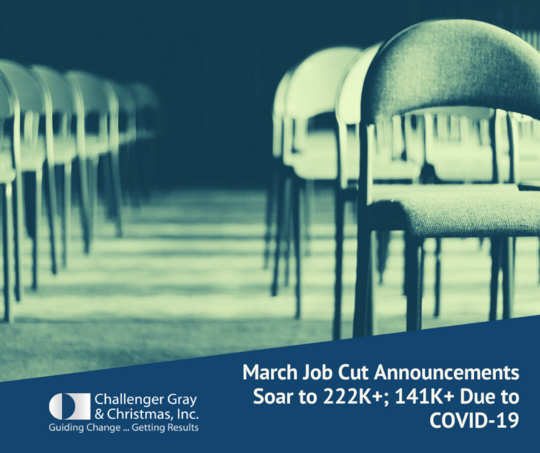 “The virus has caused total whiplash for HR, hiring managers, and recruiters. The labor data for February showed a strong economy with a tight labor market. Companies were fighting for talent across industries. Now, millions of workers have filed for unemployment, companies have frozen hiring, and in many cases, cut operations or closed completely,” said Andrew Challenger, Senior VP of Challenger, Gray & Christmas, Inc.

The pandemic that shut down non-essential businesses in nearly every state and most major metro areas caused 141,844 cuts, primarily in Entertainment/Leisure, which now leads all sectors in job cuts with 96,887. 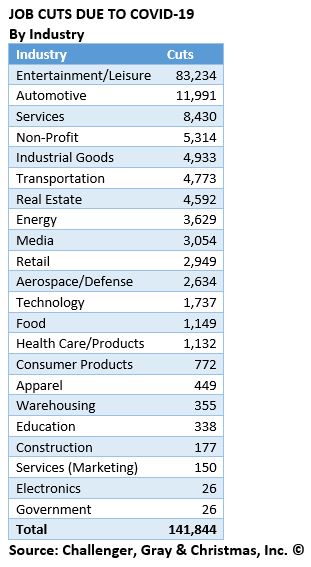 These are cuts that companies specified were due to the virus. Of the 54,300 cuts announced where no specific reason was provided, Challenger suspects many are due to COVID-19, but the firm was unable to verify this information.

Automotive companies, which include parts manufacturers and sellers, were also hit hard by the virus, which caused 11,191 job cuts out of the 13,076 total announced in March. This sector has announced 18,879 cuts in the first quarter of 2020.

The Service industry, which includes food service vendors at event stadiums, airports, and hospitals, announced 37,854 cuts in March, 8,430 of which were confirmed due to COVID-19. It follows Entertainment/Leisure in total job cuts so far this year, with 40,743.

Retailers announced the third-highest number of job cuts this year with 29,825. Of those, 11,285 were announced in March, 2,949 of which were due to COVID-19. It is also the sector that is hiring the most. According to Challenger tracking, Retailers announced plans to hire 550,010 so far this year, 462,010 of those occurred in March.

Closing companies have cost 52,748 jobs so far this year, 14,573 of which occurred in March. Another 46,648 cuts were due to corporate restructurings.

Despite the jump in job cut announcements, hiring announcements have also surged during the outbreak. Instacart recently announced they would hire 300,000 new drivers for its grocery delivery service. Grocery stores, like Kroger and Albertsons, are hiring tens of thousands of workers, and Pizza Hut, Domino’s, and Papa John’s are hiring thousands of delivery drivers.

“The pandemic has created an opportunity for grocers and food delivery services, as well as consumer products delivery services, to thrive right now. The issue is whether they can find the workers to do jobs that now come with inherent risks that did not previously exist,” said Challenger.

Indeed, some Instacart drivers and Amazon workers refused to work amid reports of workers falling ill. Many companies are increasing hourly pay to attract the workers needed to keep up with swelling demand. According to Challenger tracking, COVID-19 has caused companies to announce 821,210 new jobs. 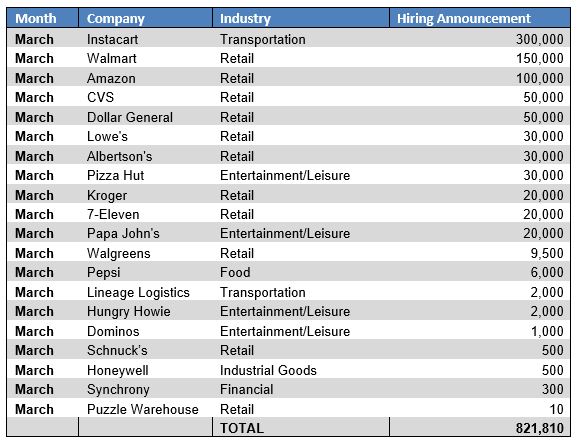