Could Crypto be the Future of How Employees are Paid? 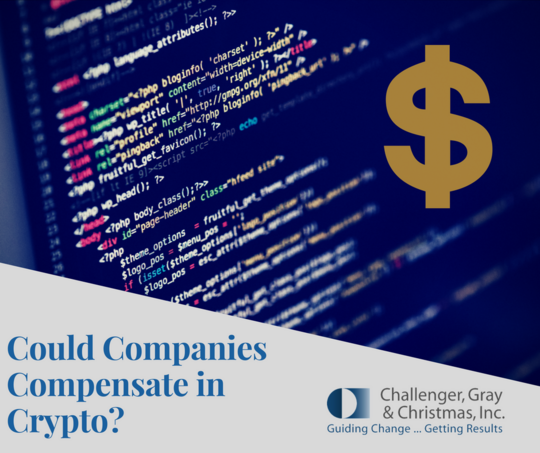 The concept of decentralized cryptocurrency without political borders can be challenging at first. However, cryptocurrencies, such as Bitcoin and Litecoin, force us to adjust the way we think about money and how to transfer value. Could digital currency be the future of how employers pay their workforces?

While cryptocurrency is currently a risky and unregulated investment opportunity for some, it is quickly becoming an alternative way of paying for everyday expenses. Over 100,000 merchants worldwide accept Bitcoin, including Microsoft, Overstock, Tesla, Virgin, and Expedia.

“For some businesses, it may make sense to begin paying their employees in cryptocurrencies. The benefits of using them are eliminating the hassle of exchanging currencies and clearing the money through banks. When you pay employees in Bitcoin, they don’t have to exchange into a fiat currency or spend it right away – although they can easily do so with the growing number of e-commerce companies processing and accepting cryptocurrencies,” said Andrew Challenger, Vice President of global outplacement and executive coaching firm Challenger, Gray & Christmas, Inc.

Moreover, many of these cryptocurrencies can also be used internationally. When an employee is paid in cryptocurrency, he or she can easily exchange it into virtually any currency at any time. Employees might exchange their coins into USD or another fiat currency when the exchange rate is in their favor,” added Challenger.

Several blockchain websites state, “as a global currency, you can send Bitcoin to anyone, anywhere in the world without worrying about cross-border remittance fees.” Because there is no “middleman” to intervene and charge management or processing fees, exchange rates from Bitcoin to fiat currencies are typically lower – a bonus for those who have personal or business dealings in other countries.

“These cryptocurrencies have the potential to offer great value to companies that operate internationally. Employers can pay their workers in the same currency, eliminating processing and conversion fees and streamlining the payment process for their employees in other countries,” said Challenger.

The earning potential for employees is significantly higher, since there’s no need for an employee to exchange their Bitcoin for a fiat currency, such as U.S. or Canadian dollars – meaning they have the advantageous option of cashing out when exchange rates are good. Additionally, employers can attract more talent by offering salary payment through Bitcoin. For example, employers in the tech industry are likely to attract more tech-savvy talent should they offer this unique form of payroll as a perk.

“That said, there are some cons with offering Bitcoin as a form of payment to employees. Because Bitcoin and other cryptocurrencies tend to be quite volatile in terms of their value, and the federal government does not regulate them, it’s unlikely that employees will be paid completely in cryptocurrency,” said Challenger.

Bitcoin is currently the world’s most popular virtual currency, but others, like TRON, Ethereum, and Ripple, are making names for themselves. Such currencies are not tied to a bank or government, and users can currently spend money anonymously. Bitcoin is similar to gold in many ways. Like gold, Bitcoin cannot simply be created arbitrarily. Gold must be mined out of the ground, and Bitcoin must be mined via digital means. In fact, there are only 21 million Bitcoin that can be mined in total. However, some cryptocurrencies, such as Ripple, are not mined. Instead, payments are facilitated by a centralized blockchain, purportedly making it faster and more reliable.

Bitcoin took a wild ride in 2017, reaching a record high above $19,800 in December and then plummeting below $11,000 in the same month. However, cryptocurrency has become increasingly popular since its debut on major U.S. Exchanges. The Chicago Board Options Exchange and the Chicago Mercantile Exchange have both started trading Bitcoin futures in their markets.

A debate is raging on the merits of cryptocurrencies – with many saying they serve merely to facilitate money laundering and illicit, anonymous payments. Others say they can be helpful methods of payment, such as in crisis situations where national currencies have collapsed.

The futures signal a greater mainstream acceptance of Bitcoin, but also open up Bitcoin to additional market forces. The futures will allow investors to bet that Bitcoin’s price will go down – also known as shorting – which is currently very difficult to do.

Digital currencies have had a fair amount of criticism on Wall Street. JPMorgan Chase CEO Jamie Dimon has called Bitcoin “a fraud.” And Thomas Peterffy, Chairman of the broker-dealer Interactive Brokers Group, expressed deep concerns about the trading of Bitcoin futures in December, saying “there is no fundamental basis for valuation of Bitcoin and other cryptocurrencies, and they may assume any price from one day to the next.”

Firms like Wagepoint, a Canadian startup based in Waterloo and Nova Scotia, offers Canadian and U.S. companies an easy way to process payroll online. The firm handles payroll deductions for tax purposes and files all the necessary paperwork electronically. Now, a growing number of customers are taking advantage of its Bitcoin payment services.

In fact, GMO Internet, a Japanese web hosting company, has just offered to pay a portion of their employees’ salaries in Bitcoin. Starting in February, workers can opt to receive between 1,000 yen ($88) and 100,000 yen ($890) of their paychecks in the popular cryptocurrency.

For this company, the shift is entirely optional, and the company is offering a range of entry points. The offer will eventually expand to all of the company’s more than 4,000 employees.

GMO Internet believes this employee compensation program could also help them become more familiar with Bitcoin as they dive further into the cryptocurrency space – improving literacy in virtual currency by actually using it.

GMO Internet is hoping to offset some of Bitcoin’s volatility by offering employees a 10 percent bonus if they choose to receive a portion of their salaries in Bitcoin. Employees that do could convert their Bitcoin salary into traditional currency at any point or wait and see where the price lands.

“As digital currency becomes more popular and more widely accepted by merchants, the likelihood of employers using it as a form of wage payment increases. Companies, especially international companies, are always looking for an efficient process to pay their workers in other countries,” said Challenger.

Could Crypto Be The Future of How Workers Are Paid.pdf
Tags:
Compensation
FutureWork
outplacement
executive coaching