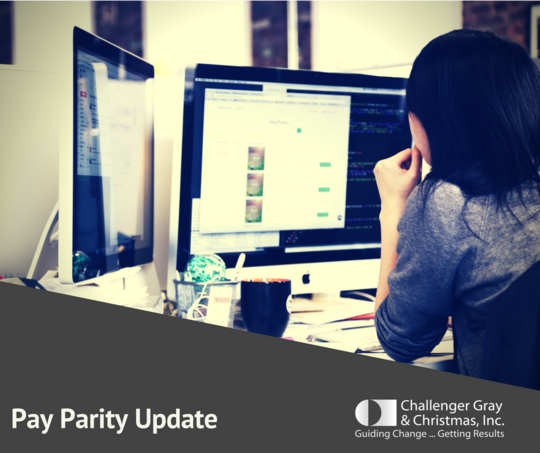 Nearly 58 percent of companies report they are reviewing compensation structures to ensure pay parity, according to a new survey from global outplacement and executive coaching firm Challenger, Gray & Christmas, Inc. This is up from 48 percent of companies that responded this way in January.

“In light of the #MeToo and #TimesUp movements, companies have taken responsibility for creating an atmosphere that fosters equality and safety in the workplace. This extends to ensuring equal pay structures that compensate workers fairly,” said Andrew Challenger, Vice President of Challenger, Gray & Christmas, Inc.

The fact that more companies appear to be making pay parity a priority, to the point where they are reviewing compensation policies, is laudable.

In January, just a few months after the Weinstein allegations broke, Challenger conducted a survey of 150 human resources executives in companies of various sizes and industries to gauge how they were dealing with sensitive topics in the workplace. At that time, 27.59 percent of companies reported that they were paying male and female workers equally and 48.28 percent reported that they were currently reviewing their compensation structures to ensure pay parity.

“These numbers reflect positively on the impact that social movements are having on actual business decisions. #MeToo and #TimesUp seem to have helped eliminate some of the taboos surrounding important issues in the workplace, encouraging businesses to open the doors to major policy and culture changes,” said Challenger.

Companies were not the only ones evaluating their situations and choosing to make major changes. Nearly 3 percent of companies surveyed found that more women had started asking for raises and over 14 percent of companies saw a more respectful work environment overall following the ubiquity of the #MeToo movement.

While these numbers are not overwhelmingly high, they show the beginnings of a culture shift. As people feel more comfortable in their work environment, they will share more ideas with their team and strive to be properly compensated for their work.

“Companies have an obligation to make sure that these positive changes continue to happen. They can do this by providing safe outlets for feedback, reevaluating people in management positions to create a positive top-down culture, and continuing to change old policies to make sure pay revolves around talent,” said Challenger.