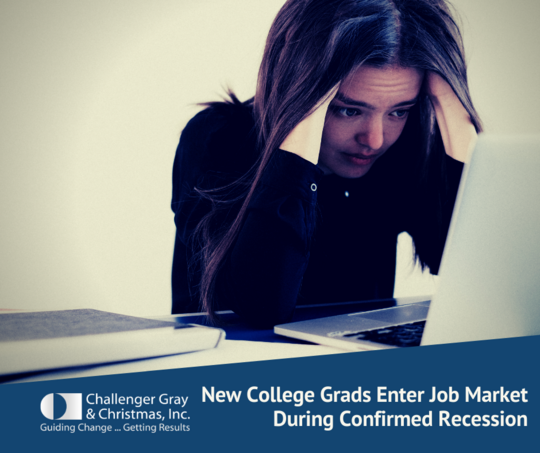 “While the country was experiencing record-low unemployment and employers reported labor shortages in a number of industries, wages were still rising much slower than expected. It was the one area that did not seem to see a boon from the hot economy,” said Challenger.

According to the National Bureau of Economic Research, college students who graduate during a recession may earn 9% less in the first year of working than they could have expected to make in better times, and it can take ten years or longer to recover. During the first ten years of work, people will experience 70% of their wage growth. Many entering the workforce during tough economic times will struggle to ever catch up and will earn tens of thousands of dollars less over their lifetimes.

Those who graduate with STEM or business degrees will likely fare better with wages. According to NACE, Engineering degrees will earn graduates the most on average, bringing in a starting salary projected to be over $69,000, while Computer Science degrees could earn a starting salary of over $67,000. Business degree holders are projected to earn nearly $58,000 in their starting positions.

“The longer it takes for a COVID-19 vaccine to be developed and distributed so the economy can rebound fully will impact how much these newest graduates’ earning capacity suffers,” said Challenger.

“Recovery will mean graduates will have to be open to changing jobs – as soon as possible and, perhaps, more often, much like their Millennial counterparts found themselves doing post-Great Recession,” he added.

“In the meantime, graduates of the Class of 2020 can begin to navigate these challenging times by building up their networks and gaining relevant experience in their selected fields. While this may not be through a regular full-time job, it could manifest through contract or temporary work.

“College grads who are having a difficult time finding a job or have had an offer revoked can also do volunteer work to apply their relevant skills. Build a website or write marketing copy for a charity working toward social change. Volunteer in these organizations’ finance departments or help with financial records. All of this can and should go on a resume, so that when the economy recovers, you have the work experience to demand a higher wage,” said Challenger.
# # #